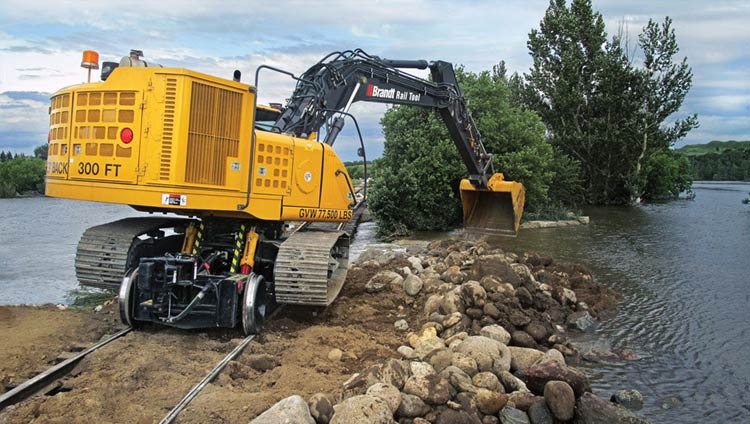 Clearing brush from train rails certainly requires some careful logistical planning. Train schedules only offer on-rail equipment and crews a narrow window of opportunity to get work done. Likewise, hauling off-rail equipment into remote sites can be a difficult challenge.

Enter the Brandt Rail Tool — an on- and off-rail maintenance machine from Brandt Road Rail Corporation that offers versatility and flexibility to maintenance crews.

The company builds three models that essentially start out as John Deere 225D, 130G, and 245G LC excavators and are modified for rail use. Brandt Road Rail equips the excavators with axles and rail wheels that can be hydraulically retracted for ground travel. Off rail, the Brandt Rail Tool travels like a traditional track excavator.

Having a maintenance machine that can move on and off the track is a timesaver, says Stephen Winkel, supervisor of a family-owned business, Tony Winkel Construction. "Due to train traffic, we may only have a four- to eight-hour window to do the work, so we need to be productive. With the Brandt Rail Tool, we can access jobs on the rail at a higher rate of speed and perform jobs much faster."

More power to the tools adds to the Brandt Rail Tools' productivity. Unlike competitive railroad maintenance machines, Brandt Rail Tools come with two John Deere engines — one powers the chassis while an auxiliary engine hydraulically powers the attachments, such as a brush cutter and undercutter. "With the John Deere auxiliary engine, we have so much more power," says Winkel. "You're not starving the hydraulics to run the attachments, which we've noticed on comparable machines that we operate without an auxiliary engine."

On the 225D and 245G LC, the auxiliary engine also supplements the base excavator for even more pulling power and speed when traveling on rail. Thus giving the Brandt Rail Tool the power to pull fully loaded rail cars at 48 km/h (30 mph), eliminating the need for a costly locomotive.

With the John Deere auxiliary engine, we have so much more power. You're not starving the hydraulics to run the attachments, which we've noticed on comparable machines that we operate without an auxiliary engine.