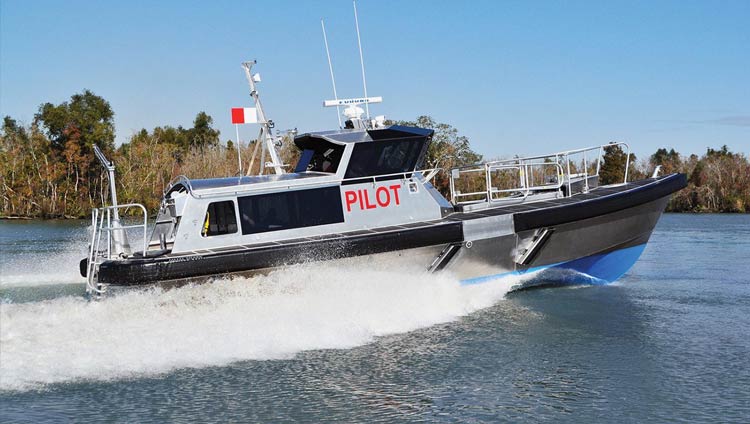 As a young man, Bill Preston surfed the waves in Gulf Breeze, Florida, keenly aware of his surfboard's movement. Depending on the size of the wave and his speed, the surfboard would either drive right through or go over it. The memory of those early experiences in the surf is what Preston drew upon when he sat down to design an innovative pilot boat with an engine-forward design.

Preston realized that boats, much like surfboards, moved through water by going over waves or through them. When boats go over a large wave, the quick drop over the side causes slamming and jars the passengers inside. So he set to work designing a boat that would go right through the waves: Redistributing weight to the front end of the boat caused a lower center of gravity that allows the boat to slice through waves in extreme weather conditions.

"I took a lot of kidding in the shipyard that I had the engine at the wrong end of the boat," muses Preston. However, once pilots were able to test the boat, they quickly realized the increased safety and comfort in Preston's designs.

After 50 years as a naval architect for Marine Design in Florida, Bill Preston and his trademark design have won over many more pilots. Preston believes his pilot boat designs are the most sea-kindly because their increased safety and comfort don't sacrifice speed.

It's not just the forward-facing engine that sets Preston's designs apart. Another interesting feature is that the boats are powered by a single engine instead of two. Bill was unaware of many other single-engine designs, but he found that it achieved the same speed as other boats with twice the horsepower.

Bill Preston celebrates his 50th year as a naval architect. He designed an aluminum pilot boat for Port Canaveral, one of the busiest deep-water ports in the world, located in Florida. After many years spent designing 12-meter (40-foot) patrol boats, Preston went back to the drawing board to design his first 14-meter (45-foot) patrol boat. At the request of Port Canaveral, it was designed with a single 485-kW (650 hp) John Deere PowerTech™ 6135SFM75 engine.

On the port's newest boat, Preston paired the PowerTech 6135SFM75 engine to a Twin Disc 5135 transmission with a 2:1 reduction mounted at a 10 degree down angle. He also drew in plans for a sealed Evolution shaft system that reduces friction to get more horsepower to the 81×91-centimeter (32×36-inch), 5-blade Hale propeller.

Preston was pleasantly surprised by the benefits of installing the John Deere engines. The pilot boats have been faster and quieter and move with more horsepower than expected. The pilot boat has been in operation for Port Canaveral since December (2014) and achieves a very respectable top-end speed of 26 knots running at 2100 rpm.

Bill Preston has proven that the time spent in the surf all those years ago did pay off. He knows what works. His recreational pastime taught him what worked, and it helped lead him to a very successful career as a naval architect thanks to innovative boat designs inspired by surfing the Gulf Coast.

Preston was pleasantly surprised by the benefits of installing the John Deere engines. The pilot boats have been faster and quieter and move with more horsepower than expected.